Be aware of the herd mentality, the reason that 99% of the people in the world will never reach success.

Herd mentality is the fact that most people are just copying what others are doing to fit into society and not make any noise.

One reason for people trying to fit in is that they have low self-esteem and don’t believe that their opinion is worth anything.

Another reason is that some people tend to look down on people who are being different and trying to achieve something.

In Scandinavia they call this “The law of Jante” and it is common that people criticize those who are trying to achieve something. 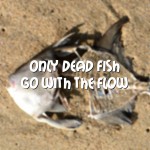 Those people are just wrong..

You’re not a sheep… You’re a person with a purpose trying to achieve something in life.

You are your own man (or woman) and what other people think of you should not matter.

How to break out of the Herd mentality

So now that you know what herd mentality is learn how to break out of it and be your own person.

Stop going on routine and just trusting anything the media or your peers are saying to you; be a source critic and actually check for facts backing up what is being said. Also notice how people in groups are usually just copies of each other.

Form your own opinion about what you like and dislike, rather than just ordering the same food and drink when out with your friends; try something new. Mimicking others is what a sheep does.

If you can’t make up your mind about a choice don’t hurry and just select something to not “make a fuzz” when you’re first in line. Instead take your time and choose wisely; Just because other people choose in a hurry doesn’t mean you have to.

Don’t care about what other people think of you. People with low self-esteem copy others to get social proof and fit in. Be a bit different, your peers will respect you for it, and if they don’t they probably aren’t that good people to hang out with to begin with.

So from now on when you are doing something, do it because you yourself want to do it! Okay?