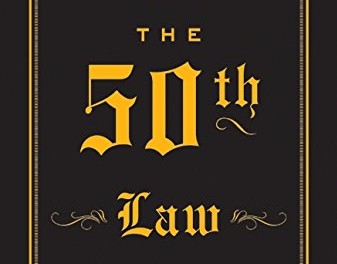 What separates those who go under and those who rise above adversity is the strength of their will and their hunger for power. —50 Cent, The 50th Law

It is not every day that one can get to read a book about the life of a rap artist, especially one that will leave you with this much wisdom. Not every rap artist can inspire and or impress people because of the public’s perspective about rappers.

Nevertheless, regardless of how the public perceives them, there will always be that one person who will prove people wrong, and that’s what Curtis James Jackson III did in his biography entitled The 50th Law, which was co-authored with Robert Greene.

From rags to riches

In the boroughs of Queens, New York, there was a boy born on July 6, 1975. He would later be applauded for his awesome master rappin’ skills. He was none other than Curtis James Jackson III, commonly known as 50 Cent.

50 Cent has had a dark past. He grew up without a parent and ventured into the ugly side of life where drugs, booze, and violence were the means to be alive. He lost his mother when he was just 8, started selling cocaine when he was 12 and carried his own gun when he was 15. All this whilst living with his grandparents who weren’t aware about what he did until he was caught by an undercover police officer.

After a stint in a boot camp, he discovered his passion for rap in a friend’s basement. He later got introduced to Jam Master Jay of Run-DMC, who taught him the ropes of structuring rap songs, writing hit choruses, counting bars, and even making powerful records. Jam Master Jay eventually produced an (unreleased) album for 50 Cent — technically his first album. However, the record deal fell through after he was shot 9 times by a drugdealer that wanted him out of the picture.

If this were to happen to you, you would be scared to go out of your house, but the opposite was what 50 Cent did. He pushed through with his dream of becoming a rapper and he obviously succeeded as evidenced by who he is now — an influential figure in hip-hop culture, actor, singer, and entrepreneur.

The collaboration of 50 Cent and Robert Greene, a Jewish-American popular psychologist, works really well. It was quite easy to listen to it several hours straight without taking any breaks (Yes I’m lazy using audiobooks.. you should too). It is really interesting that the two collaborated in a book as they come from very different backgrounds. When interviewed about it they said that they started the collaboration due to having so similar thoughts although being from very different backgrounds.

The 50th Law is at a baseline about the life of 50 Cent, but in between the stories of his life are valuable life lessons and principles on how to lead a successful life and hustle your way to the top. 50 Cent has proved that anyone can reach his dreams regardless of his heritage and what society thinks.

As mentioned, The 50th Law talks about life lessons. These life lessons adhere to principles that you can incorporate into your personal life and business ventures. These life lessons include: being realistic, self-reliant, authoritative, open to opportunities, moving with caution, making good use of connections, mastery of skills, belief in oneself, and self-reflection.

When you work for others, you are at their mercy. they own your work; they own you. your creative spirit is squashed. what keeps you in such positions is a fear of having to sink or swim on your own. instead you should have a greater fear of what will happen to you if you remain dependent on others for power. your goal in every maneuver in life must be ownership, working the corner for yourself. when it is yours to lose-you are more motivated, more creative, more alive. the ultimate power in life is to be completely self-reliant, completely yourself — 50 Cent, The 50th Law

Another key element that resonated with me was when he discussed with one of his Hustler friends and the friend says that bad stuff happens to everyone and the ones who succeed are the ones that know how to work their way through it. I’m of the same opinion that there are no bad or good things unless you make it so in your mind.

I highly recommend you to pick up a copy of the book and read it as it is packed with value and also has a good story about the life of 50 cent.